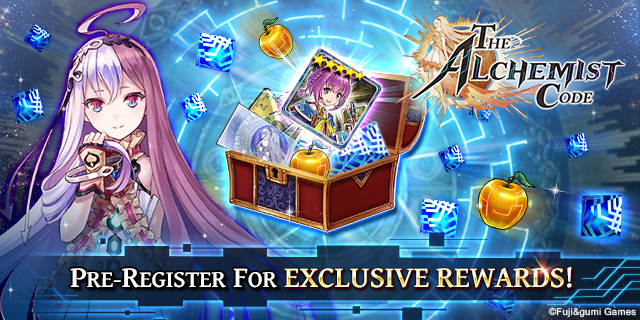 1. Click the “Pre-registrer” button at the bottom of this Event Detail Page. A message "Pre-registration Done!" will appear

2. A notification will be sent to Pre-registered users upon the game's release

How to Claim the Unlocked Milestone Rewards:

1. Rewards are credited to existing players and new players who create a game account within 14 Days after the Official Global Launch

2. Rewards will be sent to the in-game Gifts Box. It will be available for claiming for up to 30 Days

Head on to The Alchemist Code's Pre-Registration Website and join in the fun at the following Pre-registration Activities:

* Pre-Registration Milestone Campaign - Pre-register and log in daily to be awarded with daily Play Tickets to perform exciting Pre-Reg "Spin" Summons! Contribute to the campaign and unlock more in-game rewards by playing the Summons and completing the missions! Start on a good footing - spread the word and collectively join forces to unlock the highest rewards that will be enjoyed by all players as starting gifts now!

* Be acquainted with the key characters from the Chapter 1 and find out more about the intriguing story behind the world of The Alchemist Code: how the alluring power of Alchemy brought about the destruction of a world divided by differing ideals, why it was sealed away by members of the Alliance of the Seven Kingdoms, and its mysterious revival...

* Download The Alchemist Code collectibles - Enliven your conversations and phones with these Exclusive iMessage Stickers and Live Wallpapers!

Sorry! The event is finished already!